Word of the Week: cathartic - \kə-ˈthär-tik\ - adjective – (hear it!) - of, relating to, or producing catharsis (← the act or process of releasing a strong emotion, especially by expressing it in an art form)

One of my favorite things to do in the writing world is to work with fresh, out-of-the-starting gate indie authors—from questioning every nuance of their first drafts to help them build stronger stories; to the promotion stage where indies need the most support, by spreading the word about the projects they’ve honestly worked so hard on.

I love being with them during their re-writes and edits, their struggles and triumphs, their ups and downs of both jubilation and doubt as indie publishing takes them on a wild rollercoaster ride of “What’s going to happen next? . . . and will I be terrified of the outcome?!”

I’ve been there—my gosh, have I been there! . . . Well, with the “rollercoaster ride” part, anyway. Believe me, this indie publishing stuff can be trying. No doubt about that. But I’ve always felt the more support we can give one another—as indies—the better off we’ll all be in the long run. United—as indies—the full strength of our voices can be so much louder than any amount of negativity could ever be, no?

Yes, and so . . . I must say it’s been a pleasure to work with this month’s featured indie author from start to finish. I’ve witnessed the seeds of her story ideas flourish, change, and grow into something lush, full, and magnificent with the release of her first indie-published book, The Treemakers (which still on promotion as of today, December 13th, by the way). And the overall story isn’t even finished yet! Two more books (at least!) will carry this indie author’s dedicated readers through to the very end of this YA dystopian fantasy series—a wild ride in itself! (Ha! Yes, I’ve been privy to some inkling of what’s to [possibly] come.)

And you know, to be honest, I’d liken the author herself to a phoenix: rising from the ashes of a once-tattered life to become a strong, talented, dedicated writer (and mom) whom I’m both very pleased to know and very proud of.

So! Please allow me to introduce my indie author of the month . . . Christina Rozelle!

Howdy, y’all! Thanks for stopping by! And thank you, Kimberly, for letting me steal the spotlight for a moment!

I’m Christina, and I write fiction and blog from my home in Dallas, Texas, while wrangling four kids and a puppy. To be honest, I never say “howdy,” and living in New England for two years broke me of my “y’all” habit. Nevertheless, I felt I should give you a hearty Texas greeting. :)

Growing up, I practiced the religion called “Poetry,” writing maybe 300 poems in a fifteen-year span. I still have everything I ever wrote, from napkins, to paper sacks, to 20-something journals, and even though it’s all pretty terrible stuff, that collection remains one of my most cherished possessions. Poetry helped me through a troubled adolescent period, where my short attention span would never have gotten me through an entire novel. I even have a few short stories which were started and never finished. But poetry, I could do.

Fast-forward to 2012, I was talking with my then-eleven-year-old daughter about some YA books that she loved and I casually brought up the idea that I should write a book. An hour later, we had come up with a plot, which consisted of humans with wings (not angels, just wing-ed humans, yes), reptilian-human antagonists, and . . . shadow animal people. Yes, I’m serious.

Needless to say, that didn’t work out. BUT! I did start another story which I finished nine months later, and like a slimy, red, fictional newborn, “The Butterfly Prophecy,” came into the world. It had many good qualities, and was definitely a positive start in the right YA direction. Though ultimately unpublishable, it strengthened and confirmed the fact that I had a passion for storytelling, and especially, for Young Adult Fiction.

That was two years and three novels ago, and I never looked back. I’ve been blessed enough to have my parents helping me out financially so that I can follow my dream (mainly because they know it’s the thing I do best. I’ve been fired from over forty jobs in my life—true story). I’m grateful every day for the opportunity to do what I love to do.

The reason I love YA is because, well . . . freedom. Discovery. Youth. Magic. Confusion. Idealism. Betrayal. Heroism. Heartbreak. Young love. Finding yourself. Learning the world. Etc., etc. . . . . There is so much that happens in the adolescent years that it makes for an exciting (and cathartic) writing adventure for me. Now, add to that the speculative fiction aspect, and my short attention span doesn’t stand a chance!

In order for me to read or write anything, I have to be entirely engaged. Being a single mom of four doesn’t allow me the time to read/write something that doesn’t demand to be read/written. If I’m going to steal myself away, it has to make me feel, give me insight, provoke thought, induce wonder, or inject insight, imagination, truth, adventure, and self-discovery intravenously to my core. Call me a word snob if you must, but I’ll just blame it on my ADD. *Cue “Sail” by AWOLNATION* :)

My third novel, The Treemakers, is my first to be self-published, and I’m super excited about it!!!! (see?) Here’s the cover, and there’s a great story behind it. You can read it here: http://wp.me/p4TY4j-1z 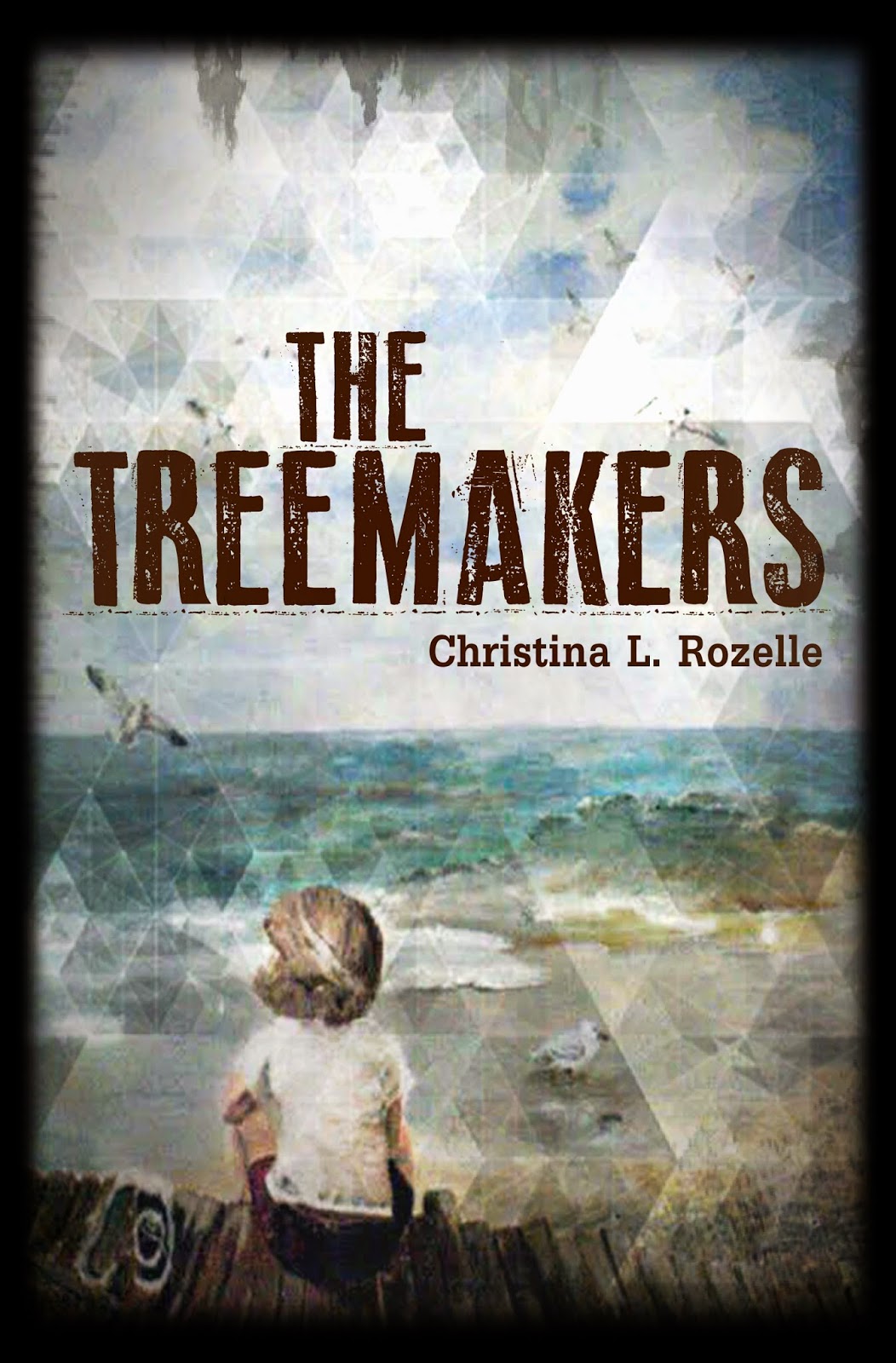 It began as a 2013 NaNoWriMo winner, and after beginning my work with Kim, I embarked on an entire rewrite, scrapping about 90% of it and starting mostly fresh, with just the story I wanted as an idea in my head. It was a seemingly insurmountable feat at the time, but in three months, I had it finished (again) and now I couldn’t be happier with the outcome. My teenager read it yesterday—the whole thing, from start to finish—demanding I let her stay up and finish it. Of course I said yes. Who wouldn’t? After years of one “failure” after another, I’ve finally found my niche, and couldn’t be happier with my progress as a person, a writer, and a mother.

Here are a couple of review snippets, along with the current Kindle Countdown promo info for The Treemakers: 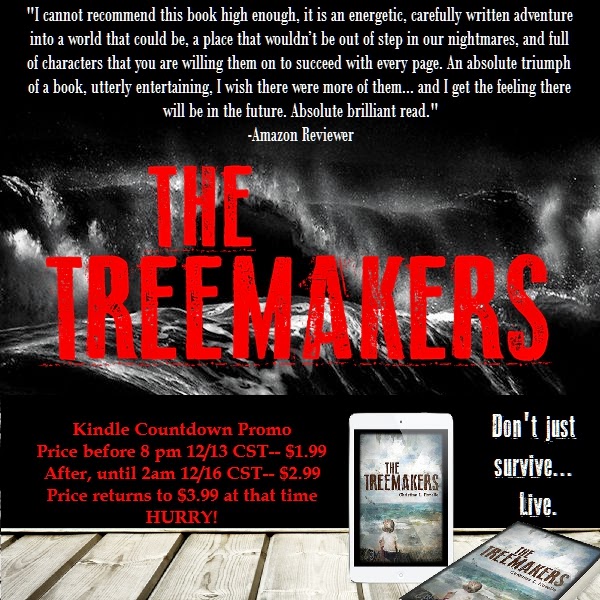 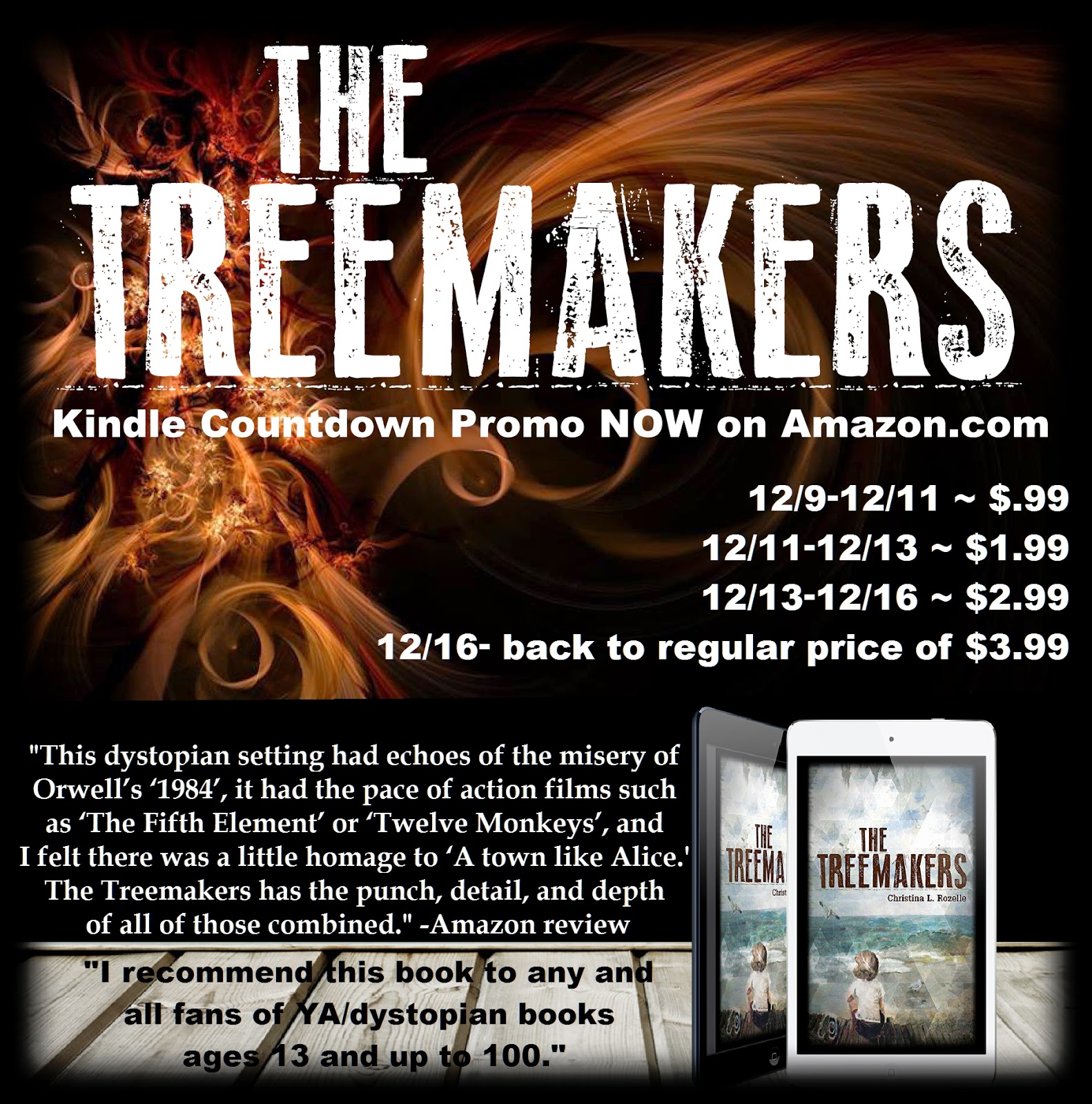 You can purchase The Treemakers ebook here.

Or the paperback through CreateSpace here.

Also, if you are of the writerly variety, I’d love for you to check out “A Spark in the Dark,” my blog for writers, here.

And if you’re feeling especially fangirl-y (or boy-ee) you can stalk me at my cyber home here.  (I’ll make sure to keep the hedges trimmed back and the curtains open for you!)

I’m currently getting to work on book two of The Treemakers, and have a surprise novelette release coming up in a couple of weeks. So, stay tuned, there’s much more to come! Thank you for taking the time to read about me and my works. And thanks again, Kimberly for letting me hangout here for a while! I hope “y’all” have a great holiday season!Christina