Hey, hey! Come give my author alter-ego, Devon Winterson, a "Like" on Facebook, and read a posted excerpt from my dark fantasy novel, The Perfect Player, every Tuesday until November 11th!

Word of the week: netherworld /ˈneT͟Hərˌwərld/ - noun – (hear it!) - the underworld of the dead; hell.

Every so often a reader will ask me: “Where do your ideas come from?”

Usually I tell them ideas just pop into my head. Which they do. Often. That’s the easy part. The “Why?” and “How?” are normally the harder questions—ones people don’t think to ask—and are really the reasons behind what we writers write most of the time.

All around, every day, writers are constantly influenced by everything around them, whether consciously or subconsciously, and every set of influences (plus the reactions to those influences) is different for every writer.

A couple kissing on a park bench, for example, may evoke feelings of love, devotion, and possibly yearning in one writer, whereas it might provoke the deep desire to retch in another. And while the second writer might view a lion’s bloody takedown of a limping gazelle as strong, powerful, and nature’s efficient way of weeding out the weak, the first writer may shudder and whine at the injustice of a helpless animal’s death.

What we writers do with what we’re shown and handed over the years usually filters through and into our stories—big time!—and it often shapes what we write and how our characters react to certain things.

Caendoria, my own fantasy world, has been influenced by a couple of things both *kind of* well known and not well known at all.

What the hell do I mean by that?? Here, I’ll show you.


If you’ve lived through the nineties and played a game called Doom by id Software, then you’re probably familiar with the Barons of Hell, and the powerful Cyberdemon (respectively), who kind of seemed like the Barons’ overseer.

Anyway, I always thought they looked pretty cool. And massive. And just plain ol’ downright awesome. Thus, the creation of my netherworld demons were influenced by the structure of these demonic characters. With my own twists to them, of course. (All authors add in their own twists to stuff we’re influenced by!) In the end, my own rendition of these demons have become the dystopian element in the otherwise perfect world of Caendoria. 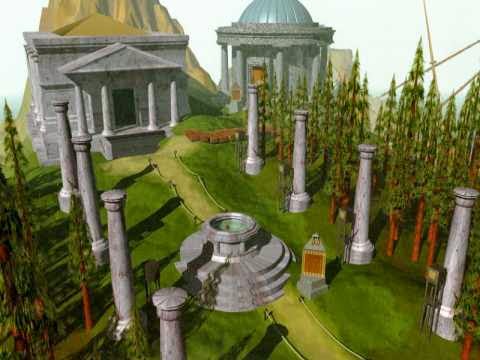 Again, if you’ve lived through the nineties, you’ve probably heard of a game called Myst by Cyan Worlds, created by Rand and Robyn Miller. Way before I ever started seriously writing (and waayy before I had children), my husband and I would sit together for hours upon hours, solving the puzzles inside the storyline, progressively unlocking each secret as we proceeded through the game.

Awesome enough, to be sure!

But the elements! Ah, the elements . . . they were purely fascinating—nearly utopian, beautifully rendered, and [mostly] pleasing to all of the senses (well, if one goes further into one’s imagination; ghost smells and all that, you know . . . ).

Little did I know these bits and pieces would captivate my then-dormant writer’s mind and lodge securely to later be altered and rendered; picked apart, stretched out, and twisted up like twisty ties to create the world I now know as Caendoria: lavender sky and grasses; thick, drinkable liquid—iridescent by day, blue luminescent by night; silver- and gold-topped trees; intricate mechanisms hidden throughout the world. All sorts of fun and unusual stuffs!

Influences. All around, every day. Things take root in our minds, our hearts, our feelings, then we mix and match in unique ways, and write it all down for everyone to share.

And if you really want to know: I am that second writer in my “limping gazelle/lion take down” paragraph. Well, minus the kissing. Kissing’s nice. Unless you see a lion kissing a gazelle. Now that would be weird.

Thus, my wonderful blog readers, I leave you with a fly-through across the Ages . . . literally. Tribute to the Myst Ages. (Note: You may need to lighten your monitor. The trailer's a bit on the dark side.)