A hearty "Congratulations!" to Lucy Pireel (indie author of soon-to-be released collection of twisted fairy tales, Red Gone Bad), who's already figured out my blogging pattern! "Every eleven days at exactly 11 hours," she said, which is absolutely correct.

Kudos to her, and as promised, she receives the mock cyber-puppy!

Once upon a time, there was a darkness.

And within this darkness lurked something so thick, and so foul, and so feral, it frightened everyone with roars of failure, threats of strife, and spam on rye. And it reeked—oh, how it reeked! Shady dealings, broken promises, stigmas that could never be washed off in a lukewarm bath with soap and water. 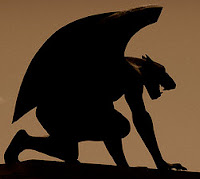 Those who dared to venture near the darkness were lured into a labyrinthine lair, bewildered, then chewed upon, sucked dry of their lifelong funds, and spit out as a carcass forever branded poor and naïve, while the creature within laughed, and laughed, and laughed.

Oh, how everyone trembled! “No!” they'd cry in unison to those who dared to venture near the vile darkness. “Never, never go near that! It will devour you—alive!”

Thus, they all shied like skittish horses, for fear of losing all they had gained and all they had yet to accomplish sat too precious within their hearts . . . until a different creature crawled out from this darkness, one that no longer fed on the impatience of the naïve, and it glowed with the light of more feasible possibilities. . . .

All right, so maybe it wasn't always a horrid creature skulking around in the dark. But if memory serves, used to be very few writers wanted to touch self-publishing with a fifty-foot pole; it was considered a last-ditch effort of the desperate writer willing to pay a subsidy to publish his book. (Yippee!) And it was expensive. (Damn!) Thousands of dollars (Ouch!) to create hundreds of hard copies (Only hundreds?!) that may or may not have been sold anywhere—ever. Oh sure, a few to friends and family, and friends of the family, and families of the friends, etc. and so on . . . but to bookstores and other distribution outlets? Pfft. Who had that kind of chump change to throw away? “Oh, gee, here's a random two thousand dollars. Let's be all crazy-like and take a chance down this dead end street. Whoopee!”

But the landscape of self-publishing has changed over the years—a lot.

But as I squinted deeper and deeper into my cracked and clouded crystal sphere of success versus failure, I could see . . . yes, it does matter. All of it, and it's all tied together.

So that left me with: “Where the heck do I start?” (← note the lack of colloquial double punctuation there; calmer, yes, calmer. . . .) And the answer is (all together now!): “At the beginning!”

*stares, dumbfounded, at the rubber band ball of indie publishing*

For those of you familiar with circles or spheres or any other round things, you know these objects don't have distinct beginnings or endings, so my starting at the beginning of indie publishing was as futile as my trying to morph into a fish.

But! I did learn two very important things. One: true indie publishing is distinct from subsidy publishing.
. . . and as one who thrives on maintaining control over everything that involves my projects, full-length or short, the prospect of indie publishing was far too tempting to resist. Thus, I started there, at . . . um . . . well, somewhere in the middle of the rubber band ball—snap-twang!—and I'll merely fumble my way through it by trial and error, then report it all here, so you can laugh, and laugh, and laugh, whilst I suffer dreadful misery and woe from within those infuriating tangles of stretchiness. *sigh and sob*

(1) A deliberate semi-misnumbering, yes. Good of you to notice.