Word of the Week: abhor /abˈhôr/ (hear it!) - transitive verb - to regard with disgust and hatred - (Merriam-Webster Dictionary) 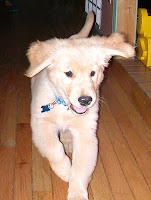 Anyone who knows me, knows I love, love, love the golden retriever. Goldens are large breed dogs who grow fast and love hard with an insurmountable affection for their owners . . . and well, all right, anyone else they happen to meet, be it human or animal.

Over the past thirteen years, I've been graced with owning two goldens, having lost my first one to stomach cancer. Now, mind you, I fully understand that (doggie) mothers aren't supposed to compare their (canine) children to one another. Yet I do. And while I see many fantastic similarities between Jake (my former) and Bailey (my current), differences still abound.

Jake was sleeker, taller; a golden-blond boy who sported a longer snout and weighed in at 85 pounds.


Bailey is more muscular, compact; a (smidge) darker-golden boy with a broader face—he weighs in at around 75 pounds.

Now, don't get me wrong. Bailey is near perfect; a beautiful boy from a litter of five males and five females (oddly enough, the same ratio as Jake's siblings) bred/produced by Jennifer Craig of Harborview Goldens, an excellent breeder with high standards for her pups. I have absolutely no complaints.

Yet because Bailey's more compact, thus smaller than Jake was . . . yes, I have affectionately dubbed him my “pocket-sized” retriever, even though he's a perfectly proportioned, perfectly sized golden, well-bred in every way.

Of course, this “pocket-sized” term eventually gave rise to a random thought: “What if there were pocket-sized retrievers? Goldens a wee bit slighter . . . ?” Yeah, well, all right. More than a wee bit, perhaps. I was thinking of a golden one could pick up and put into one's pocket. You know, like a Chihuahua.

. . . until I stumbled across the “miniature golden retriever,” a.k.a. "comfort retrievers."

Yee cats and little fishes! How cute. Itty-bitty, teeny-tiny, pocket-sized retrievers . . . er . . . well, kind of. And yet I'm torn. One thing I adore about the golden is their size. So should these wonderful animals, in reality, be downsized? I've read a host of comments.

Owners of full-sized purebred goldens seem to loathe the idea of these mini-golden breeders selling golden look-alike “designer dog” mutts (many of these minis are a mix—yikes! Say that ten times fast!) all for a profit. Mini-golden breeders seem to insist they're working to enhance their minis to echo the original (and larger) counterparts for those who love the golden but can't, or won't, own a large breed dog.

Well, didn't the majority of current purebreds begin as mixtures who were bred accordingly through many generations to enhance desired characteristics to create very distinct breeds? Purebred goldens were originally developed in the late 1800's from a Yellow Retriever mixed with the now-extinct Tweed Water Spaniel, and from there bred to various setters and other wavy-coated retrievers (even a bloodhound, according to the AKC) to produce Goldens we know now, AKC recognized in 1925, earlier by the Kennel Club in England.

The first goldens (all right, they weren't true goldens—yet) were once mixed-breed dogs, and were even listed as golden flat-coats at the turn of the last century, but bred to obtain the desired golden retriever traits we know today. It took a quarter to a half-century for this breed (KC and AKC, respectively) to be recognized as true and distinct, in and of itself.

And I can hear it now: Yeah, yeah. That's different. Those breeds are all separate from one another: goldens, Labs, flat-coats, Irish setters, gordon setters, Newfoundlands, bassets, etc.

With these new mini-goldens, a sub-set of the full-sized golden . . .

So again, who's truly right?

It might come down to this: knowledge, responsibility, and honesty. Complete knowledge of the original breed and a decent sense of responsibility to further better it (albeit in miniature) with the honesty to produce, to the best of their ability, proper litters of healthy, well-balanced pups . . . all without the driving factor of the almighty dollar.

I absolutely abhor the idea of some less than scrupulous breeders raking in hefty profits by offering “cool and unusual” canines or “designer dogs” to the unwitting as much as I abhor irresponsible breeders of goldens (for example) and Labs and at one point, dalmatians, to take advantage of a certain breed's popularity for monetary gain; this only spawns ill-bred animals who quite possibly end up in shelters later on.

But I'm not totally willing to discount the rise of these miniature goldens, either.

Ah, well. I'm not a breeder, so maybe I don't, or never will, understand the whole process. I do think miniature golden retrievers are cute; however, “cute” is not a good enough reason to create any new sub-set breed. Neither is money. Breeders blinded by fads, willing to pump out tons of pups all for profit, well . . . that's more than just poor judgment. It's wrong.

I'd love to see it done right, intact scruples and all. (Yes, that was an intentional doggie dig.) And there must be some loving, responsible breeder out there who will.

“Hey! Whoa! Hang on there!” you blurt out, possibly in confusion, but more likely in exasperation. “Why all this golden retriever talk when your blog has been focused on writing and indie publishing and being an author?” 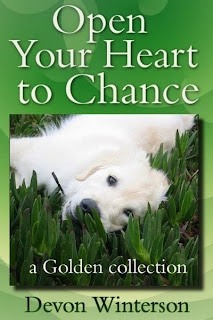