A couple of Christmases ago, the name of this month's indie author was plopped into my lap.

Well, all right, not in the literal sense, but done so nonetheless by a very trusted source. Curious and always looking to read good indie stories, I Kindle-downloaded this particular author's then only-available short story. Little did I realize I was in for such a wonderful treat!. . . .

Dumb White Husband vs. The Grocery Store by Benjamin Wallace was hands down filled with absolutely terrific humor; relatable scenarios turned on their sides and told through the amusing viewpoint of . . . a “dumb white husband.” (Who was certainly not dumb at all!)

Yes, yes, normally I'm partial to humor a bit on the darker side. But sometimes straight-out humor for humor's sake is just plain fun to read, so I was thrilled to learn Mr. Wallace had released The Big Book of Dumb White Husband packed with short stories along much the same humorous lines, all interconnected in some way or another, and all told through the various tales of three husbands (all basically at odds with one another) who live on the same block.

Really, once you've visited them, you just don't want to leave. And guess what? We don't have to!

Pretty soon, Dumb White Husbands vs. Zombies will be served up in five segments. Sign up for his newsletter, and you'll get the first episode when it's released. And if you're not yet familiar with Mr. Wallace's line of books, this will be the perfect way to get your feet wet.


But now, without further ado, here is Mr. Benjamin Wallace to introduce, well . . . not necessarily himself, but to discuss an interesting review he'd gotten on a book of his that's been out for quite a while: Post Apocalyptic Nomad Warriors.

* * *
Who says the apocalypse isn’t funny? One reviewer did. She bought a book billed as a Post-Apocalyptic Comedy and, once deducing there had been a war at some point, said there was nothing funny about that. I’m not sure how she was expecting to read a post-apocalyptic book that didn’t have an apocalypse in its backstory. But she helps prove a point.

What she obviously doesn’t get is that a post-apocalyptic world will be full of funny because it will be full of people. And people don’t know what they’re doing—everyday people that now find themselves in charge of what’s left or, what’s funnier, what to do with themselves since no one is around to tell them what to do.

Where would you go? What would you do? What to name your new town? Do you adopt the cage match system of justice? There’s no end to how people will try to start over. What will they keep? What will they abandon? After an apocalypse, the world is more open than ever. And, since people usually make bad choices, there is no shortage of humor in a world with no rules.

When the apocalypse does come, I think we all envision ourselves being one of the oddments. We like to picture ourselves in a world without rules. We like to see ourselves as the heroes. But, in reality we’d probably just be standing around staring at the mud wondering why food isn’t growing.

So, why not have a little fun with it? The genre is rich with stereotypes of the gritty survivors facing impossible odds, mutants, gangs, action and adventure, the lone hero. But drop any real person in a world like that and you’re going to get a ton of laughs.

* * *
Learn more about Benjamin Wallace and his books at his really cool blog: Dumb White Husband

Please support this indie author! You'll be glad you did.

Ooo, ooo! And guess what? He's also a talented artist. I'm not sure what these bears are all about, but they look really awesome, and I'm told we'll discover more about them pretty darned soon. 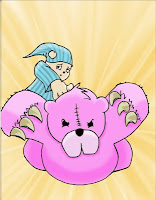 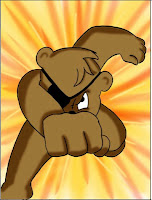 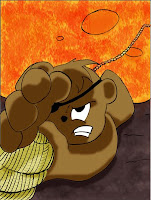